There’s a rather unlikely story in the local news this week—a head-scratcher, really. It concerns two of Laurel’s historic landmarks, and how they’re supposedly at odds all of a sudden. I’m speaking of Laurel Park Racecourse and the Laurel Railroad Station.

I’ll get right into it: Laurel Park, which after decades of hard times is finally seeking to turn the corner with an ambitious plan to build “a transit-oriented development with retail and residential space near the racetrack,” has requested the state Department of Transportation open a commuter train stop in Laurel closer to the track.

Because that would just be too easy, state Department of Transportation officials have said that it is unlikely the state will consider a “dual stop” at both the Laurel MARC station and the racetrack. A train platform is already at the racetrack, mind you, but is listed as a flag stop (where trains will only stop when there’s a specific request) on the MARC Camden line schedule.

So, here comes the head-scratcher: the idea being proposed is that the DoT would close the Laurel Station—which is on the National Register of Historic Places—in favor of building a new stop at the racetrack, a mere 2,500 feet away. Where, again, there is already a train platform in place. I’m not sure there’s a more polite way to put this, so I’ll just ask: Are you f***ing kidding me?

Don’t get me wrong—I’m a huge supporter of both places. More than anything, I’d love to see a resurgence of horse racing in Laurel, and have Laurel Park once again become the premier venue that it can be. But certainly not at the expense of endangering what might be the town’s most recognizable landmark—a landmark that, frankly, has been more functional than the track itself in recent years.

Granted, I can’t see anyone in their right mind coming out and proposing that the old train station be demolished—to my knowledge, nothing like that has been discussed. But what would happen if/when the historic station ceases to be an active stop on the MARC line? We already know how vulnerable the city’s old buildings tend to be, especially when they’re vacant.

Lest anyone forget, Laurel came dangerously close to losing the station to fire in January 1992. John Mewshaw recently shared these photos with me—sobering reminders, all:

With the expectation that cooler, more rational heads will ultimately prevail in this, let’s look at some more reasonable options.

First, there’s the basic issue of supply and demand. If enough people genuinely start taking the train to the races again, as they did back in the early-to-mid-20th century, there’s no reason why the Department of Transportation shouldn’t reinstate Laurel Park as an active stop on the MARC line. But even then, closing the town’s historic station wouldn’t make sense, logistically, especially as it relates to everyday commuters with no interest in visiting the race track.

The current station sits in the heart of Laurel at the base of Main Street and provides easy access. From a marketing standpoint, its historic qualities also benefit the commuter rail industry—the classic, Queen Anne styling of the station literally makes you want to take the train… in a way that a new, more modern facility probably wouldn’t.

And marketing is something that Laurel Park obviously needs to do a better job of, too, if it hopes to reinvigorate the track to the point of needing an exclusive train stop to accommodate the masses. For the record, I’m not a fan of their newest logo:

As a graphic designer myself, I have serious doubts that it was created by a professional. It’s poorly executed for a number of reasons, but I digress. Their logo problems aren’t the main concern here.

But what they should be focusing on—instead of this new train station folly—are unique ways to maximize their exposure (regardless of that hideous logo). And ironically, the old train station is a perfect opportunity for them. I’m just going to offer this up, so Laurel Park Powers That Be, do with it as you please:

Imagine seeing a row of shuttle buses lined up as you get off the train… buses that are whimsically adorned with thoroughbred horse artwork (or, to go even further, imagine the entire bus being decorated to look like a race horse itself…) A row of buses, each designed as an individual race horse, complete with saddle cloth number… 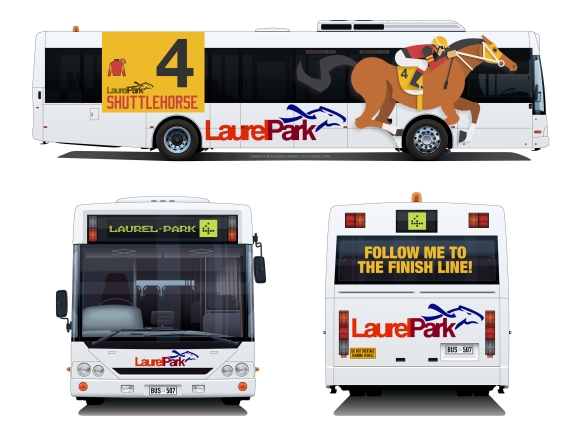 Much like the old train station invites you to ride the rails, wouldn’t that pique your interest in going to the race track? And imagine the exposure the buses themselves would get just being spotted going back and forth on Route 1—especially when two or three at a time are “racing” there. (Not to encourage gambling, but you could even place bets on which “horse bus” arrives first…)

Keep in mind, I did this in about half an hour. Imagine what could be done with proper time and exploration. (And I’d be more than happy to design it for you, Laurel Park. I assure you, it’d be cheaper than a new train station, too.)

And from a practical standpoint, (e.g. the number of people actually going to the race track from the train station) wouldn’t shuttle buses also just make more sense? At least until Laurel Park starts generating the types of crowds that might require more drastic measures?

For the record, I do hope those crowds eventually return, but only after the race track (and the city) has solid plans in place to accommodate them. First, they need a plan to actually draw them. To paraphrase the Field of Dreams mantra, “Build it, and they will come.”