Way back in 1977, just as I was getting ready to start kindergarten, my parents made the decision to move from Hyattsville to Laurel. I still remember helping my dad gas up the Pontiac as we set out to explore what would be my hometown for the next 20 years.

I know it’s cliché, but I’m amazed at how quickly those twenty years went by. I’m even more amazed—and frankly, a little terrified—at how quickly the next twenty flew by, as well.

For those who don’t know, my dad passed away on April 26th—my wedding anniversary, coincidentally. He’d been battling bladder cancer for about a year. It was already Stage 4 when they diagnosed him, and he’d had no previous symptoms or health issues in his nearly 78 years, despite a very sedentary lifestyle in the decades after his service in the U.S. Army.

Yesterday, nearly five months to the day he passed, my dad’s ashes were inurned at Arlington National Cemetery. 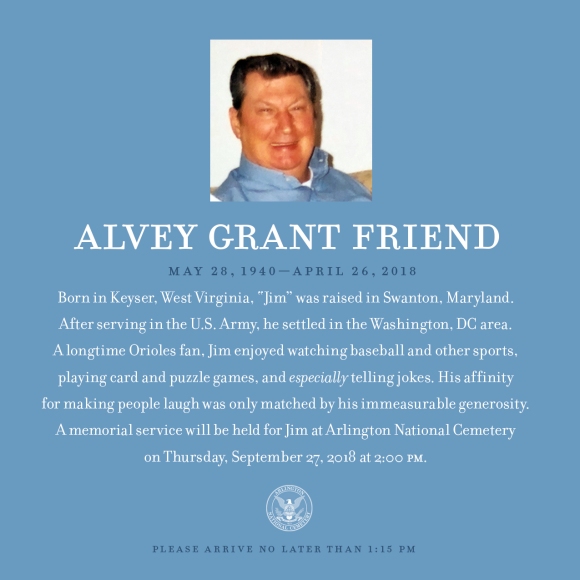 Bending the rules ever-so-slightly, our Arlington representative let me attach a miniature recliner chair ornament to his urn, which I know he would’ve gotten a kick out of. (I’m telling you—the man loved a comfortable recliner.) 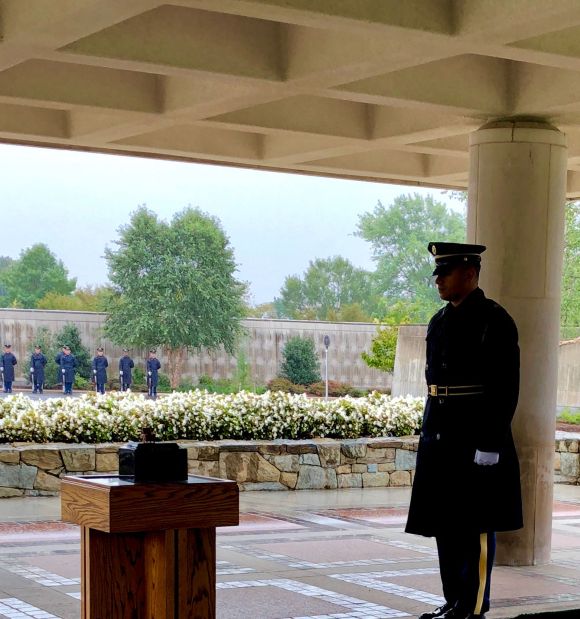 The ceremony was awe-inspiring and humbling. And to have family and friends there to support us, as well as the thoughts and prayers of those who couldn’t attend—it was quite an experience.

I’ve had a lot of time to reflect on my dad’s life recently. The theme that I keep coming back to is generosity. That’s who and what he was. We didn’t have a lot of money, mind you; but he was always giving—giving his time, or whatever he had to share.

He seemed to have an endless supply of Wrigley’s gum throughout the years, and he was never content to just offer you a stick of it—he’d insist that you take the remainder of the pack, “so you’ll have some for later.” I now make it a point to keep a constant supply of Wrigley’s gum on my desk at work, to share with my coworkers. Every time someone stops by for some, it’s a wonderful reminder of my dad.

A few years ago, a gentleman sent me a message here on Lost Laurel. He’d recognized my name, and recalled that he and my dad had worked together at an electrical supply warehouse in Northeast DC back in the early 1980s. When my dad learned that this fellow also lived in Laurel, he offered to give him a ride to and from work every day. But there was an important detail that he shared with me, which I’d never heard before. “I remember when we had to do the annual inventory one year that paid double-time, your dad was going to buy you a video game with the overtime pay. This was around 1981.”

That’s how I got my beloved Atari 2600. The fact that someone I’ve never met still remembers this seemingly insignificant moment over 35 years later, and was compelled to share it with me, speaks volumes about my dad. I’ll always treasure that story. And I’m grateful that I had the chance to relay it to my dad before he got sick, and to thank him not only for the Atari gift so long ago, but for all the giving he’d done.

Shortly before I embarked on the long drive to Holloway Funeral Home in Salisbury to pick up his urn on Wednesday, I thought about what else I can do to honor him. Pete Lewnes, one of my fellow Laurel History Boys, had been telling me about the American Cancer Society’s Relay for Life that’s held every year in Laurel. Knowing what a tremendous help the American Cancer Society was to my parents throughout my dad’s ordeal, I decided to start a Laurel History Boys team—and now I’m looking forward to participating in the walk on June 8th. To raise money for a very good cause—in my dad’s name, and in our old hometown—is going to be a very special thing.

If you’d like to make even a small contribution, it would mean so much to me. If you’re local to the Laurel area and would like to join our team or volunteer in some other way, that would be just as welcomed. I encourage you to check out the Relay for Life site and learn more about this great event. It’s still several months away, so there’s plenty of time to spread the word.

Your generosity, much like my dad’s, will be remembered. Thank you.

3 thoughts on “Walking for Dad”