Lost Laurel reached an amazing milestone this weekend—5,000 Facebook fans! To celebrate, I’ve designed over 50 t-shirts inspired by long-gone Laurel landmarks with even more to come. They’re available on-demand exclusively at Spreadshirt.com, and a portion of each purchase helps support the Lost Laurel project—including the sneak preview below…

Since the Lost Laurel book came out, several people have asked if there’ll be a sequel. Not exactly; but my next book project promises to be even more fun. It’s a collaboration with Laurel Leader “History Matters” columnist Kevin Leonard, and highlights an absolute treasure trove of rare photos and artifacts from the Berman family—the visionaries who built Laurel Shopping Center in 1956 and have made so many other contributions to our town in the years since. Stay tuned, as this one is just starting to take shape!

In other book news, I was thrilled to learn that Lost Laurel was officially added to the Prince George’s County Memorial Library System‘s collection, and a reference copy is now housed at the prestigious Maryland Room in the Hyattsville Branch. As a former clerical aide who re-shelved books for nearly 10 years at the Laurel Library, it’s such an honor to have a book of my own in the collection. 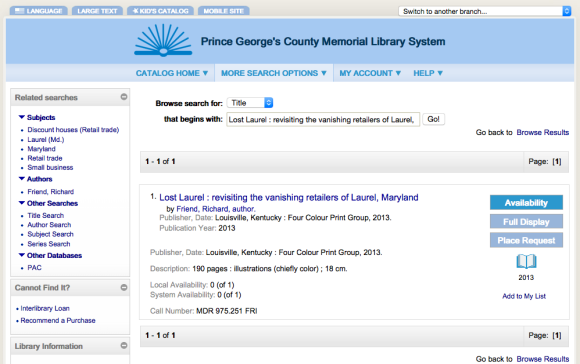 Thanks to everyone for continuing to spread the word and share the nostalgia!

The latest episode of Lost Laurel on Laurel TV is the second part (and finale) of our special History of Laurel Shopping Center. Whereas Part 1 focused on the 1956 grand opening festivities, Part 2 covers the 1966 expansion that doubled the shopping center’s size; as well as the 1971 addition of Georgetown Alley, and 1979 arrival of Laurel Centre Mall. There’s also a segment on the shocking 1972 assassination attempt of Governor George Wallace.

Laurel Leader “History Matters” columnist Kevin Leonard and I had the pleasure of spending a morning reminiscing on location with Denny Berman, whose father and uncle built Laurel Shopping Center. Denny, who fondly remembers the Fifteen Fabulous Days grand opening as a six-year-old, essentially grew up at the shopping center—where he eventually joined the family business, and today is a General Partner of Berman Enterprises.

This episode also marks entirely new territory for me, having had to learn (very quickly, I might add) to both film and edit it myself. Tyler Baldwin, who had not only deftly handled such duties for each of the previous episodes—but initially pitched the very idea for the series—started a new job in December. (Good luck, Tyler!) Rather than start over with another director, I decided to take a stab at producing it all on my own and simply delivering the final product to Laurel TV. While it was a little scary, (and a lot of work) I have to say, I did enjoy putting it together and being able to see the story evolve from start to finish. I hope you’ll enjoy the result, as well.

My thanks also to sound designer Donnie Conty, who (despite having never been to Laurel before in his life) joined Kevin, Denny and me on that cold, rainy morning at Laurel Shopping Center to ensure that I filmed everything correctly. He then worked his audio magic on the final cut, making sure it sounds great.

My plan is to continue producing the show on my own, hopefully still at a rate of one new episode per month. I’ve already started on January’s edition, which you’ll see a teaser for at the end of this one. It will cover the Lost & Found Laurel exhibit, which just closed at the Laurel Museum on December 21st. Beyond that, let me know what you’d like to see! I’m considering everything from past restaurants, department stores, specific neighborhoods, vintage crimes, and more. Keep the ideas coming, and as always, thanks for your interest!

Laurel TV: Teaser for Next Episode

Laurel Leader columnist Kevin Leonard and I recently had the pleasure of spending a morning at Laurel Shopping Center—reminiscing with the wonderful Denny Berman, whose family built the complex in 1956. I’m still working on the full episode for Laurel TV, (this busy holiday schedule isn’t cooperating) but here’s a teaser trailer in the meantime.

My thanks to Denny and Kevin for braving what turned out to be a cold, rainy morning—albeit one that didn’t hinder the memories. Also, to Donnie Conty, who helped set us up with the necessary tools to produce this one on my own. I think it turned out well, and hopefully you’ll be as excited about this upcoming episode as I am!

The latest episode of Lost Laurel on Laurel TV has aired, and is available on their YouTube channel. They’ve given me an HD version to post for my own archive, which is great, since the video includes some fantastic vintage photos!

This is the first of a two-part series on the history of Laurel Shopping Center, which focuses on the 1956 grand opening—including an itinerary of the “Fifteen Fabulous Days” celebration, the incredible promotions created by owners Melvin & Wolford Berman and Arthur Robinson, and an interview with Bart Scardina, Jr., whose father opened Bart’s Barber Shop as one of the original tenants. Of those original businesses, only Bart’s and Giant Food remain open today.

Part 2 will cover the 1966 expansion of the shopping center, the 1971 addition of Georgetown Alley, and the 1979 arrival of Laurel Centre Mall. We’ll also look at Laurel Shopping Center’s day of infamy—the 1972 assassination attempt of Governor George Wallace. We’ll be filming that in the coming weeks.

As always, a special thanks to Laurel Leader “History Matters” columnist Kevin Leonard for his segment, and to Denny Berman and Bart Scardina, Jr. for taking the time to share their memories.

Just so you know, you’ll be hearing me talk about “The Berman Collection” quite a bit in the coming months.

The Berman Collection is a treasure trove of photographs, newspaper clippings, and other artifacts from the family of Laurel Shopping Center founders Melvin and Wolford Berman.

Denny proved not only to be a wonderful source of information, but keenly interested in helping us document the history of the groundbreaking shopping center his family built in 1956, which quite literally put Laurel on the map—at least in the eyes of retailers, shoppers, and those not solely interested in horse racing (which, to be fair, put Laurel on the map several decades earlier).

With incredible generosity, Denny Berman decided to donate a massive number of materials to the Laurel Historical Society, including a large scrapbook specifically documenting every phase of the “Fifteen Fabulous Days” campaign that comprised the November 1956 grand opening of Laurel Shopping Center. If you’re interested in such history as I am, trust me when I tell you that it’s the Holy Grail.

I’ve already shared a few photos on the Lost Laurel Facebook page, but that’s not even the tip of the iceberg. Kevin and I have been slowly but surely photographing and scanning every inch of the collection before it goes into the Laurel Museum—we’re working on a book that will showcase the material and the Berman family’s contribution to Laurel.

That being said, one of the most intriguing pieces in the collection is this empty record sleeve:

What’s interesting about it? According to a description card, the sleeve originally held a recording (no known copies exist) of a Laurel Shopping Center theme song—which played on speakers throughout the center, on TV and radio commercials… even from a helicopter.

Now, I told you Denny Berman is a wonderful source of information. He’s also a great sport. I had the pleasure of meeting him this week with Kevin, and when I brought up the theme song topic, he not only remembered the lyrics—he agreed to sing it for me.

This will be part of the next episode of the Lost Laurel TV show, which is actually a 2-part series on the history of Laurel Shopping Center. It features many of the photos from The Berman Collection, and Denny himself plans to join us on location for the second part, which I’m really looking forward to filming with Laurel TV in early December.

With the new Towne Centre at Laurel planning its official grand opening this Saturday (despite having been open for quite some time already) on the site of the former Laurel Centre Mall, it’s the perfect time to take a closer look at the history of the mall that started it all.