A Nightmare in Laurel

When I decided to write a piece about the Stefanie Watson cold case back in 2012 to mark the 30th anniversary of this incredibly brutal, yet remarkably obscure crime, I didn’t expect much to come of it. I certainly didn’t expect P.G. County Homicide detectives to solve the case the following year; I didn’t expect the killer to still be alive to answer for the crime; I didn’t expect to meet and become friends with Stefanie’s family and other key participants in those events from 1982, and sit with them at the killer’s sentencing; and I definitely didn’t expect to play a part in bringing about an episode of On the Case with Paula Zahn, focusing on this tragic, but fascinating story.

But all of those things have indeed happened, and I’m excited to see the episode premiere Sunday night, 9/25 at 10p.m. on Investigation Discovery.

I’m getting chills from the preview alone.

This morning began on an odd note. At 5:30 AM, I was awake before the sun came up—in order to make sure I could be at the Prince George’s County Court House before 9 AM. It was dark, it was raining… and yet, birds were chirping.

The birds must’ve known that the darkness and clouds weren’t going to linger much longer. It was almost poetic, like so many other things surrounding the Stefanie Watson cold case, which officially reached a milestone this morning. John Ernest Walsh entered a guilty plea and was finally sentenced for her murder.

I had the honor of joining Stefanie’s family at the court house for his sentencing—a recap of that incredible experience is below.

While there are still plenty of questions to be answered, this was a tremendous milestone. After nearly 34 years, the case is finally closed.

I’m grateful to see that Stefanie’s story is also finally getting the attention it deserves—newspapers across the country are already running the Associated Press story about today’s hearing, and now that the case has been adjudicated, Investigation Discovery has been in touch about producing an episode of On the Case with Paula Zahn. Stay tuned for that.

This past Thursday night, July 9th, I had the honor of giving a special presentation on the Stefanie Watson cold case, describing Lost Laurel‘s role in helping to reignite the investigation into the 30-year-old crime—which finally yielded an arrest. Nearly 33 years after her murder, the case is slated to go to trial next month.

The program was part of “The Rest of the Story: a series based on “Ripped from the Headlines, Laurel in the News”—the current exhibit at the Laurel Museum, which focuses on local and national stories and how they were covered locally. The Stefanie Watson case is one of the stories. The exhibit runs through December 21, 2015, and visitors to the exhibit can browse the Laurel Leader from 1897-2008. 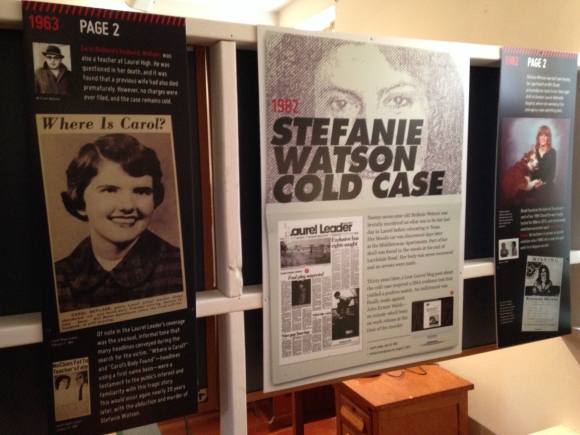 Presented by the Laurel Historical Society and hosted by the Laurel Police Department at their beautiful Partnership Activity Center, a good turnout braved some heavy rains to hear the program—including Mayor Craig Moe and Chief of Police Rich McLaughlin. My thanks again to all who came out, especially in that weather.

The highlight for me was one special surprise attendee—Christy Torres, who made the drive from Pennsylvania. Chris is the cousin and best friend of Stefanie Watson; the same cousin who had the unfathomable task of reporting her missing back in 1982, when she failed to show up for their planned trip to Ocean City. 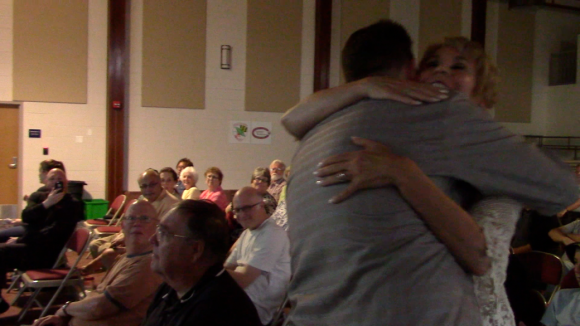 I’d spoken to Chris at length on the phone and by email, but hadn’t met her until Thursday night. After the presentation, she said, “I have something for you,” and pulled out a beautiful, hand-carved wooden box. “This belonged to Stefanie.”

It’s an incredible gift that I will truly never forget, and it will always occupy a special place on my desk. Despite having never known her, Stefanie’s memory was never far from my mind, all these years. I’m happy that it will be even closer now.

For those who weren’t able to attend, the entire program was filmed, complete with a question and answer session. You can watch directly on the link above, or view it here on YouTube. I’ll also be focusing my next episode of Lost Laurel for Laurel TV on this story, where you’ll be able to see the aerial photos, maps, etc. that were used in the program in more detail.

Somewhere, I’d like to think that Stefanie Watson is looking down on us, smiling at the latest news—news that I first heard today from her cousin, Christy, who has been waiting 32 years for justice.

Two years have already passed since I first wrote about her murder, marking the 30th anniversary of a Laurel cold case that had somehow received next to no press throughout the decades. Then, last summer, the breakthrough finally came: Prince George’s County cold case detectives took the initiative to send DNA from the seat of Stefanie’s 1981 Chevette for analysis (the complete, blood-soaked chair had been kept in evidence all this time). Blood on the back unequivocally matched that of an inmate—John Ernest Walsh—who’s been incarcerated since 1989.

Walsh, who had been incomprehensibly released from Jessup’s now-defunct Patuxent Institution—despite having served only 8 years of a 72-year sentence for an unrelated kidnapping, rape, and attempted murder—committed this horrific crime during his brief period of freedom, before violating his parole in 1989 and returning to jail. He’s been a guest of Eastern Correctional Institution for the past 25 years; but until last summer, the thought of ever facing charges in Stefanie Watson’s murder had probably never crossed his mind.

Last June, Prince George’s County Police announced that a warrant was filed against Walsh. And today, after taking nearly 15 months to bolster their case, they announced the official indictment.

We’re also finally getting a chance to see what Walsh looked like around the time of his fateful encounter with Stefanie.

Nope. Not much improvement.

So, the next step will be the actual trial—where John Ernest Walsh will finally answer for the murder of Stefanie Watson during that unforgettable summer of 1982.

Laurel hasn’t forgotten Stefanie, and never will. Those of us who lived there in the days following her disappearance; in the weeks after young Todd McEvers made that grisly discovery in the woods at the dead end of Larchdale Road; and in the three decades it’s taken to find the man responsible for her death. We’re finally ready to see justice, and hopefully get even more answers.