When I was about 11 years old, I started collecting baseball and football cards. As a sports fan, the early 1980s was an exciting time to be living in Laurel, Maryland—literally midway between the 1982 Super Bowl Champion Washington Redskins and the 1983 World Series Champion Baltimore Orioles.

It was around that time that Mike McNeal, one of my best friends in the neighborhood, gave me something that upped the ante: a handful of plastic protector sheets for my collection. He’d found them at a place called “Den’s Collectors Den”, which was tucked away in the Laureldale Business Center off Rt. 198 in Maryland City, just behind what was then the Toyota dealership on Laureldale Drive. How he ever found it, I still don’t know; but one day, his mom drove us both there to stock up. 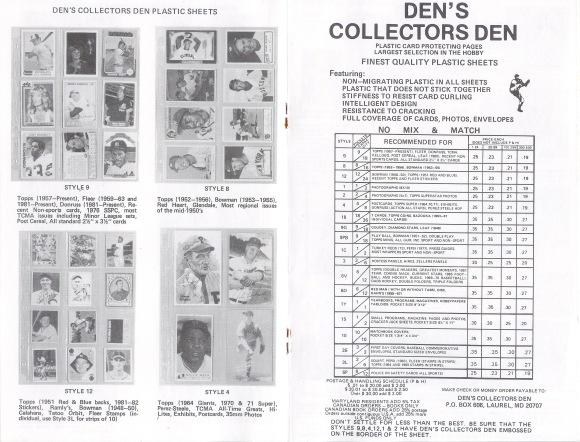 These plastic sheets are common today, and come in more shapes and sizes than ever—in fact, I use Ultra Pro Platinum sheets for the bulk of my Lost Laurel stuff: 8″ x 10″ photos, matchbook covers, 4″ x 6″ postcards… and, of course, Bob Windsor football cards.

But those early sheets from Den’s Collectors Den are even more special today—the name and Laurel address were embossed right into the plastic! Admittedly, I was never what you’d call a serious collector. I liked finding cards of my favorite players, and trading with friends; and to some degree, the design of those old cards might have even played a small part with me eventually becoming a graphic designer. But at the time, the concept of “value” never really entered my mind. I knew that older cards were certainly worth more, but that was about the extent of it. Of course, now I cringe at the memory of the countless rookie cards I let slip through my fingers… Cal Ripken and Rickey Henderson… Joe Montana and John Elway… *sigh* But I digress.

No, back then it was all for fun—as it should be. And part of the fun was discovering the tools of the collecting trade itself, and there was no better guide to such things than a catalog from Den’s Collectors Den.

Absolutely stuffed with products and information, the catalogs themselves were something to behold. More than anything, Den’s promoted an array of baseball card pricing guides—which were updated every year to give collectors (even amateurs like me) a guideline for card values. It was an added thrill to look up a particular card in your collection, and find that it was more valuable than others. In my case, this usually meant a difference of about 40¢. But again, I digress.

These price guides also included a “condition guide”, which showed you the basics for grading cards—everything from “mint condition” to “poor”.

What I didn’t realize at the time (and, in fact, only recently learned) was that the whole concept of sports card pricing guides essentially began with Den’s Collectors Den—specifically, the owner, Dennis “Denny” Eckes. 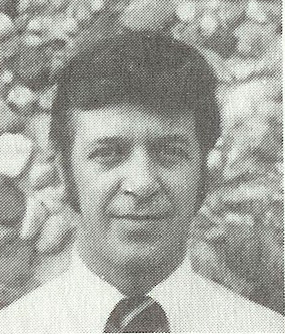 Denny had produced a rudimentary handbook between 1975 and 1978, called “The Sport Americana Checklist”—a nearly 100-page, saddle-stitched black and white booklet that was a mishmash of typeset lists, thumbnail images to represent each card type, and numerous late additions clearly made with a common typewriter. It was exactly what the title claimed—a basic checklist of every baseball card issued since 1948, and some generalized pricing information added to the backmatter. But in this completely uncredited book was the basic formula for what would become the modern sports card price guide.

Detail from the 1975 booklet. Hmm… I should check into whether or not I’m related to #392 Bob Friend.

Everything changed the very next year, when Denny teamed up with a statistician and fellow collector named Dr. James Beckett. Yes, that Dr. James Beckett—the one who would eventually launch Beckett Media, the world’s preeminent authority on collecting. In 1979, they produced what is today universally acknowledged as the first price guide of its kind. And as you can see on the title page, it was published and distributed by Den’s Collectors Den of Laurel, Maryland. 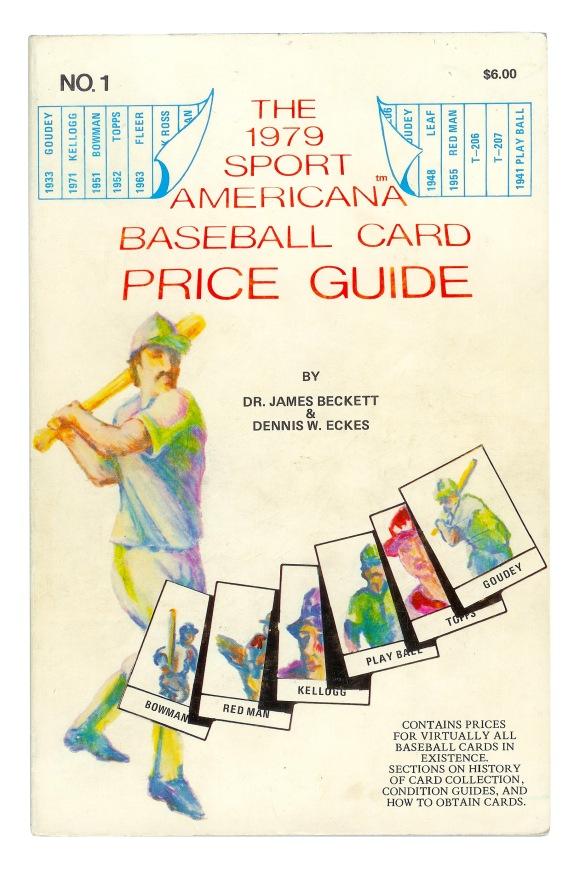 Due to demand, there were actually two versions of the first Sport Americana Baseball Card Price Guide in 1979. And when I say “in demand”, I mean it—kids and adults alike clamored for the book, and most weren’t exactly gentle with it in their haste to discover the value of the hidden gems in their collection:

Someone was determined to hold this copy together by any means necessary. (Photo: eBay)

The edition with the white cover was the original, and is the Holy Grail of price guides if there ever was one. But shortly thereafter, an alternate cover was designed that included the “Baseball Card” logo in a custom typeface—this would appear on all subsequent issues under the Sport Americana banner. And on the back cover of both was a full-page, full-color ad for Den’s Collectors Den.

Inside cover & title page of the updated version, which included author bios.

Eckes and Beckett didn’t stop there. Throughout the early 1980s, they expanded the Sport Americana brand with additional books, including the Alphabetical Baseball Card Checklist (1979) and the Baseball Memorabilia and Autograph Price Guide (1982).

All the while, Den’s Collectors Den—the physical store in Laurel—continued its success. The price guides, plastic protector sheets, and other goodies were hot sellers.

Always the collector, Denny traveled the country, participating in the fledgling sports card trading show circuit—which itself is a massive industry today. In his dealings, he’d frequently unearth rare items which he’d typically manage to share with the collecting community in some shape or form. A perfect example was his discovery of previously unpublished artwork that matched the 1934-36 series of the National Chicle Company’s popular Diamond Stars set. A blank-backed proof sheet of 12 additional cards was determined to be the series’ 1937 extension that never was; and Denny ultimately had the proof reproduced and the cards brought to life in 1981. He even reinterpreted the classic wrapper itself, which bears his company’s name and Laurel address.

For $3, you could buy a professionally-printed set of 12 cards that completed a legendary collection that had been cut short some 45 years earlier. 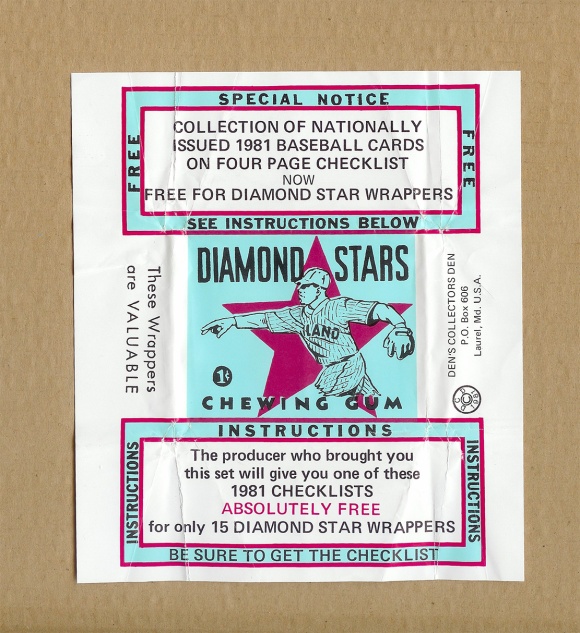 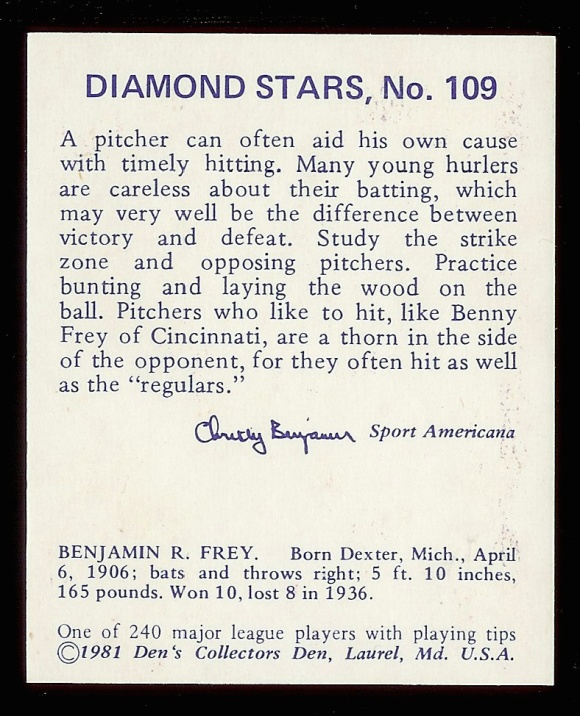 This type of “reprint” was extremely rare at the time, and it inspired Denny to create yet another niche in the market. Den’s Collectors Den also carried similar extension sets and reprints produced by other manufacturers, such as the 1952 Bowman set by TCMA.

I’ve heard from a number of collectors and hobbyists who knew Denny Eckes personally, and I’ve never heard a negative thing about the man. Naturally, I was curious as to what became of him, as there seemed to be very little information beyond the final books he produced in 1990—expanding into football and basketball price guides, as well as a book of agents’ mailing addresses for autograph hunters.

Unfortunately, I found the answer in the June 1991 issue of Beckett Baseball Card Monthly, one of the many expanded publishing efforts that James Beckett had taken on after his early success with Denny and Sport Americana. Filling the first page of that issue is a moving tribute—a eulogy to Dennis W. Eckes, who’d passed away unexpectedly in his sleep on April 15, 1991. He was only 48. The eulogy was written by Dr. Beckett himself, and paints a glowing portrait of a true visionary whose influence is still being felt in what has become a bigger business than ever before.

Denny Eckes, who ran the inconspicuous little sports memorabilia shop in a Laurel industrial park, made quite a splash in his short lifetime. My only personal experience with him was some 30 years ago—as a kid at his glass display counter, eager to plop down my meager allowance at 25¢ per plastic sheet for my football cards. But the products he sold and the pastime he promoted have certainly stuck with me all these years, and I’m grateful to finally know and share a bit more about his legacy. Hopefully, someone who knows his story better than I do will be able to help shed even more light on this remarkable man.