The Rest of the Story: Stefanie Watson

It’s still over a month away, but I hope you’ll mark your calendar and join me for a special presentation on July 9th. I’m honored to be part of the Laurel Historical Society’s summer program called “The Rest of the Story | A Series Based on Ripped From the Headlines: Laurel in the News”. It’s a companion series to the current exhibit at the Laurel Museum, which highlights some of the biggest stories that have ever graced the pages of the Laurel Leader (among other publications).

I’ve been asked to give a talk on a subject that’s particularly important to me—the Stefanie Watson cold case. 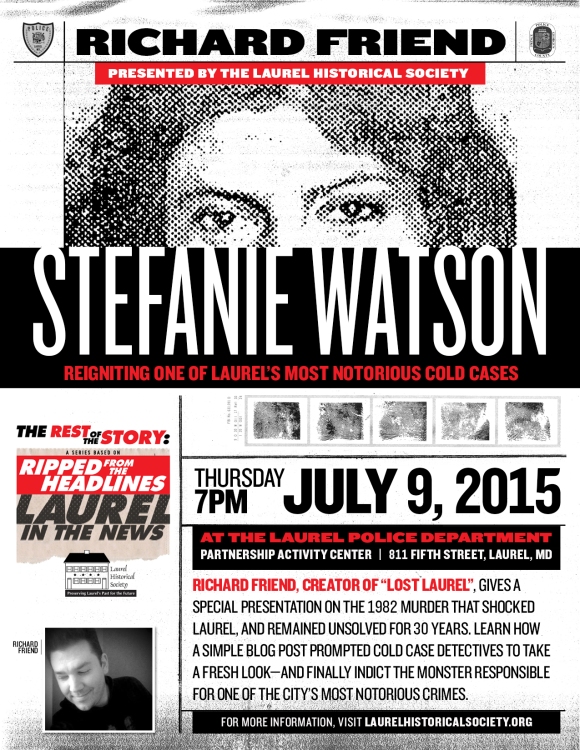 I first wrote about the brutal 1982 murder of Stefanie Watson here in 2012, to mark the 30th anniversary of her death and to hypothesize a theory. I was a 9-year-old kid at the time of her disappearance; and while I’d never met her, the sheer horror of the crime—and the fact that virtually nothing had been written about it in the media in the three decades since—had always stuck with me. I decided to write something in the context of Lost Laurel to mark the occasion, never imagining that it would not only have a hand in reigniting the investigation, but that a DNA match would finally lead to her killer’s arrest after all these years.

It was a unique chance for me to reminisce about the people and places of Laurel in 1982, while exploring territory that was entirely new to me: discussing an unsolved murder with the Chief of Police in my hometown… retracing Stefanie Watson’s last known footsteps… comparing notes with Prince George’s County homicide detectives… becoming friends with Stefanie’s family, and ultimately getting that amazing call from her cousin that an arrest had been made.

I’m putting together this presentation to tell the full story in person. It’ll be hosted by the Laurel Historical Society, and for the first time, will be held at the Laurel Police Department‘s spacious Partnership Activity Center—which many of you will remember was originally the First Baptist Church of Laurel.

If any of Stefanie’s former co-workers at the Greater Laurel-Beltsville Hospital (or anyone else—friends or neighbors—who knew her personally) are interested in attending and possibly sharing your memories of her, that would be wonderful. Likewise, any current or retired police, fire, and rescue personnel who may have had some connection to the case—we would love to hear from you.

This summer will mark 33 years since Stefanie Watson’s murder. It will also mark the beginning of John Ernest Walsh’s trial for this crime that has haunted Laurel now for more than three decades.

Stefanie Watson: Reigniting One of Laurel’s Most Notorious Cold Cases