It’s funny how these things come together sometimes. No matter how hard you try to remember everything, or how much research you do, you’re bound to completely forget a few places. And sometimes, the biggest, most unlikely-to-ever-be-forgotten stores are the ones most easily overlooked. Such was the case with PACE Membership Warehouse.

At least I wasn’t the only one. None of the 700+ folks on our Facebook page had mentioned it thus far, either.

So last night, while glancing at my WordPress dashboard, I noticed something new in the search engine terms module. Typically, the phrases I’ll see are things like “laurel movie theater”, “irish pub laurel maryland”, and “laurel mall closing”. These are terms that someone has entered into a search engine (Google, etc.), which subsequently led them to this blog.

a warehouse off route 197 in laurel, md that sold food out of a warehouse in the late 80s and early 90s not shoppers

name of old store in laurel, md that sold food in late 80s like a warehouse not shoppers

list of food warehouses in laurel, md in late 80s and early 90s not shoppers

As you can tell, they were pretty adamant that it wasn’t Shoppers Food Warehouse. It took a moment to register what this place could possibly be, but then it hit me. PACE.

It had to be PACE Membership Warehouse, the innovative wholesale giant that opened in Laurel in 1985. At the time, it was a whole new concept: a massive, spartan warehouse filled with bulk buys for membership-based customers. According to reports, there were only 8 other companies like it in the entire country, and none in the Baltimore-Washington region.

According to Wikipedia, PACE was founded in 1983, and was part of the Kmart Corporation. Not coincidentally, two other warehouse clubs also began operations in 1983: Costco and Sam’s Club. Right behind them, in 1984, came BJ’s Wholesale Club (which was started by another familiar Laurel retailer, by the way—Zayre.) All of these followed Price Club—recognized as the very first warehouse club—in 1976.

By the early 1990s, the competition was pulling away, however; and PACE, unfortunately, just wasn’t able to keep pace. In 1993, Walmart acquired it from Kmart and converted many (but not all) locations into Sam’s Clubs.

After posting just the logo alone on Lost Laurel’s Facebook page, dozens of people began to reply—including many who worked at PACE. Surprisingly, they apparently hadn’t thought about it in years, either.

Below are a number of press photos from 1986 and 1992, respectfully, which are being sold by the Historic Images photo archive on eBay. And following those are a couple of particularly interesting articles (as well as display ads) from local papers leading up to the opening of the Laurel store. With today’s prevalence of big box stores and its effects on small town commerce, these articles are somewhat prophetic. It’s also ironic that PACE itself would be absorbed by Walmart, with whom so many countless small businesses simply haven’t been able to compete.

I’m still hoping to track down some photos of the actual Laurel store; but in the meantime, hopefully whoever was searching for PACE returns to see what what their initial search prompted… and what we’ve uncovered so far. 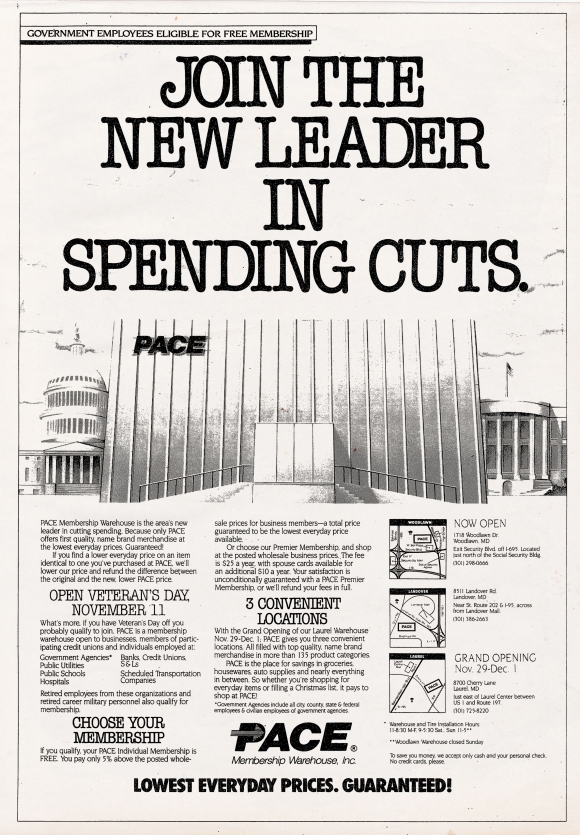