For all the years I lived in Laurel—and for several years before and since—a unique mid-century modern 4-story building has sat between Rt. 1 north and south, at the intersection of Rt. 198. Over the course of those years, it had been a number of different banks, along with various upstairs offices. It was originally the American National Bank Building, and it was a highly-touted architectural addition to Laurel in the early 1960s.

Some remember it as “the big blue flashbulb building”, hinting at its resemblance. 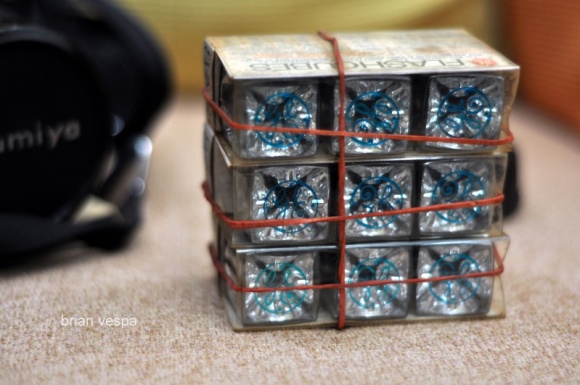 But others simply remember it. Even if, like me, you’ve never been inside the building, you remember its presence in that location—visible from up and down Rt. 1, and when approaching from either direction on Rt. 198. It was just there, and it’s going to look and feel decidedly different when it’s not.

I’d love to know more about its background, but there’s not a lot of readily available material to be found. If you have any specific information, please share!

A quick Google search of “American National Bank Building” will reveal a couple of noticeably comparable styles. Admittedly, I know very little about the architectural origins and history of any of these buildings, but look at the aesthetic similarity of these larger structures—both of which also happened to be American National Banks. The one in Austin, TX, which opened in 1954, was designed by the Austin-based firm of Kuehne, Brooks and Barr. This building made it to the Preservation Texas 2009 list of most endangered places in the state. Clearly, somebody in Texas recognized the value in preserving that building, and made it happen.

I also came across an old postcard, featuring an even taller model from nearby Silver Spring, MD. Unfortunately, I couldn’t find any accompanying details on its story or what’s become of that one. 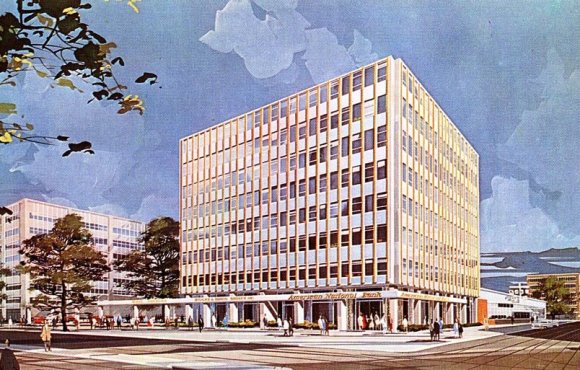 The question (for any architectural scholars and/or generally curious folk out there) is whether these buildings were actually related—were they designed by the same firms, influenced by them, or was it just a mere stylistic coincidence?

It might be a moot point now, as Laurel’s old American National Bank Building is living on borrowed time.

I’d heard that it’s going to be demolished very soon; with a Walgreen’s, of all things, slated to replace it. The old building had apparently sat empty for quite some time—a literal shell of what was once the town’s premier architectural landmark. Falling into disrepair, it has since been condemned; it now sits awaiting its fate with broken and boarded-up windows, padlocked doors, and crumbling plaster. It actually looks like it might fall in on itself before the wrecking ball even touches it, sadly.

I visited it in late December 2011 and early January 2012 and took the photos below. I’ll be sure to get some photos of the actual demolition itself when it finally occurs, and the subsequent construction of the new Walgreen’s.

Somehow, I doubt anyone will be writing about the Walgreen’s some 40 years from now, but I guess time will tell.