Yesterday, I read a particularly distressing story on LaurelLeader.com. One of my all-time favorite places—and one of the few remaining Laurel stores that had been a constant while I was growing up—and then some—is apparently closing after 35 years.

Admittedly, before last year, it had been awhile since I’d visited the Laurel Art Center. But like an old friend many miles away, it felt good just to know it was still there. And it was an old friend, indeed. An old friend that remained the same throughout the passing decades.

It was an extraordinarily special place for me, particularly as a youngster. I was one of those kids you hear about who literally started drawing from the moment he first held a pencil. I drew everything, and I drew it on everything—as this early depiction of an epic football battle between the Philadelphia Eagles and the Pittsburgh Steelers can attest. I drew it on the back of one of my mom’s paper placemats sometime around 1979. You’ll notice that I hadn’t quite grasped the rules of football at the time; although I still can see the benefit to marking the field with “60” and “70”-yard lines and so forth. But I digress. 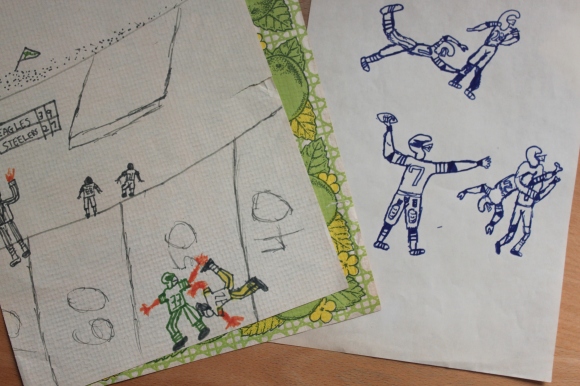 As a young artist, I was fascinated with the tools of the trade: the pencils and felt pens, and the marks they made on paper. And the paper itself, for that matter. Fortunately, I was blessed with parents who recognized and nurtured my talent at a very early age. My mom, on routine trips to the likes of Woolworth’s or Zayre, would invariably come home with a small gift for me—a sketch pad, and/or a little set of watercolor paints. I’ll never forget the thrill of trying out new art supplies, regardless of what they were or where they came from.

As I progressed, I learned that there was an entire world of real art supplies out there—far beyond my standard number 2 pencils, generic felt tip pens, and little sets of watercolors. There were actual drawing pencils, with a range of textures and contrast; there were papers that were actually designed to accommodate watercolors—unlike my mom’s standard white typewriter paper (or her paper placemats). This world first presented itself to me in the form of the Laurel Art Center.

To me, the phrase, “like a kid in a candy store” has never been so apt as when I visited this place. And it has always felt that way, whether I was 10 years old, twenty-something, or today, as I’m closing in on 40. From the weathered, wooden outdoor facade to the cavernous aisles filled with every art supply imaginable, the Laurel Art Center never changed. The smell of graphite pencils, wooden frames, and the occasional hint of turpentine is just as apparent today as it was when I first experienced it.

I came across this terrific set on Flickr from member clgmaclean, which captures the essence of the Laurel Art Center and its myriad inventory. Somewhere on those countless cardboard displays and particleboard shelves, I’m sure my own discreet doodles still exist—as I tested many a pen before buying it. 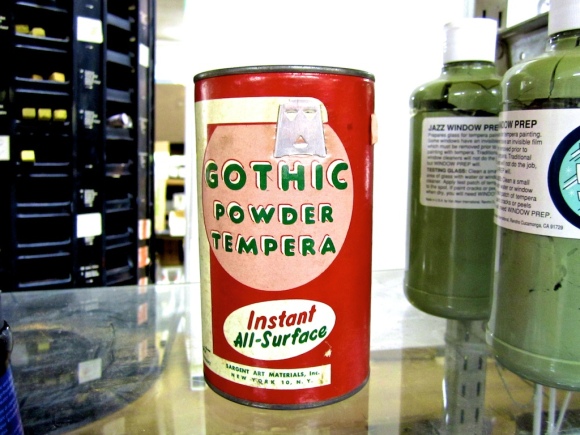 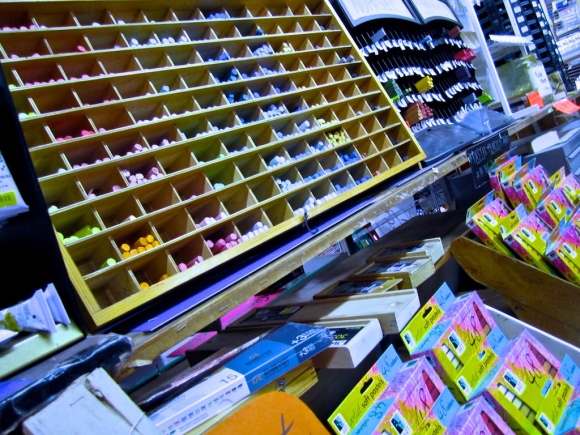 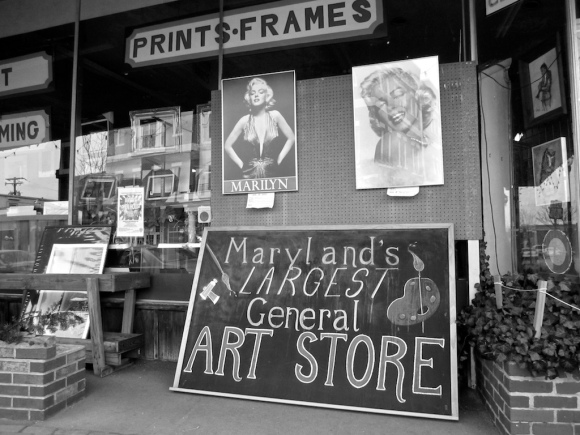 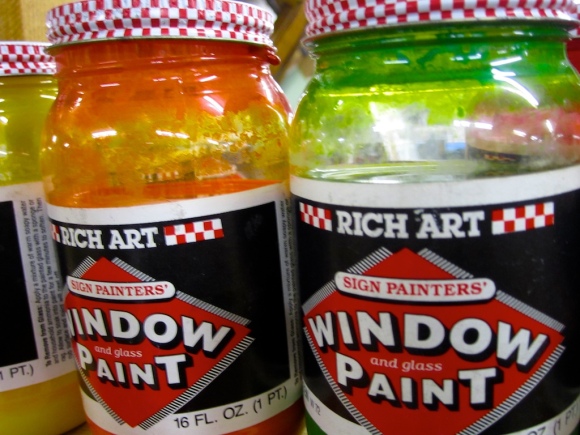 While the store itself hasn’t changed all these years, its purpose has evolved for me during those three distinct periods I alluded to: childhood, college, and adulthood.

As a kid, it was simply an artistic wonderland; a place to experiment and learn with tools that just weren’t available at the local five and dime.

When I enrolled at the Corcoran College of Art + Design in the Fall of 1993, it was the first and only place I went to purchase my required supplies—an epic supply list that I’m told was photocopied and saved by staffmembers at the store for future use!

Long after graduating and becoming a graphic designer, it was this project—Lost Laurel—that brought me back to the store once again. Not for art supplies, ironically, but for the fantastic prints by local artists Marian Quinn and Cathy Emery—prints that document countless Laurel buildings and landmarks that are long gone. It was the first resource I thought of when I started Lost Laurel. And funny enough, I remembered seeing some of them in the store all those years ago… At the time, however, it didn’t dawn on me just how prescient they were. Why would anyone want a print of Keller’s News Stand, or Petrucci’s Dinner Theater, or Pal Jack’s Pizza, I remember thinking—they’re right here next to the Art Center. Yeah, 30 years ago they were. Now they’re gone, like so many other places that were uniquely Laurel. 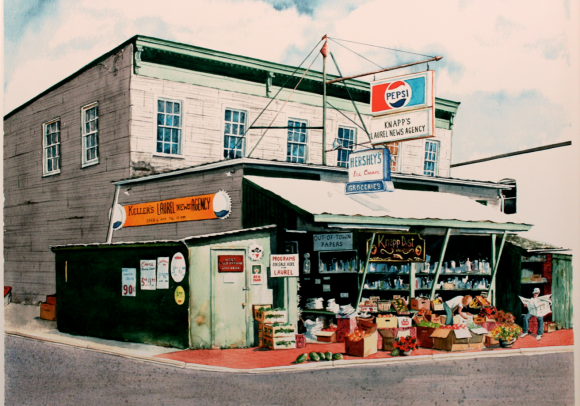 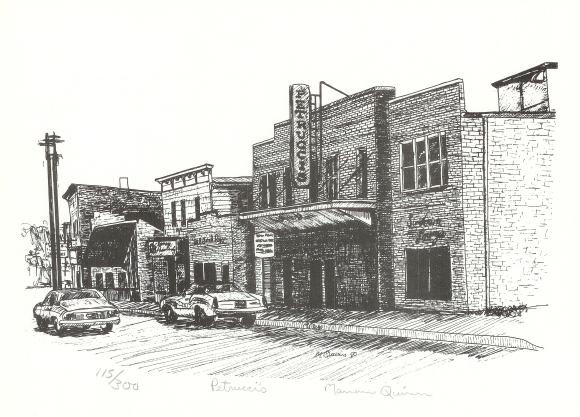 I’d made several trips to the the Laurel Art Center in recent months, picking up a number of these historical prints for my collection, which I’ve been sharing primarily on the Lost Laurel Facebook page.

Each time I browsed the selections, one print in particular caught my eye. And now, even while recognizing how prescient it was, I couldn’t bring myself to buy it. It was a Marian Quinn pen and ink drawing of the Laurel Art Center itself. While I wanted it—and certainly wished I’d just gone ahead and grabbed it while I had the chance—I felt as though I might be jinxing my old friend. I was there to get artwork of places past, not places that I held hope would continue to persevere.

According to the article in the Leader, the Laurel Art Center’s closing may not be permanent. At least, not yet. There seems to be a chance that the store will open on a temporary schedule (I suggest checking their Facebook pages often for updates—here and here) until the ownership issue can be resolved. And to that point, I want to wish Mr. Leo Emery—the wonderful man who founded the store all those years ago, and who has remained such an integral part of it ever since—and his entire family the best of luck. That goes for everyone who has ever worked at the store, as well. I also want to give them all a belated, but heartfelt thank you for all that they’ve done—for as long as I can remember. If there hadn’t been a Laurel Art Center, who knows what I might be doing today. I can’t imagine that I would’ve maintained such a strong interest in art had it not been for them. I would’ve eventually gotten bored, just doodling on my mom’s paper placemats, and moved on to something else. Instead, I found inspiration in that store like nowhere else.

I’ll end this post with another look at the past, as well as a glimpse at the near future. It can be seen in this photo—one of my favorites from John Floyd II: 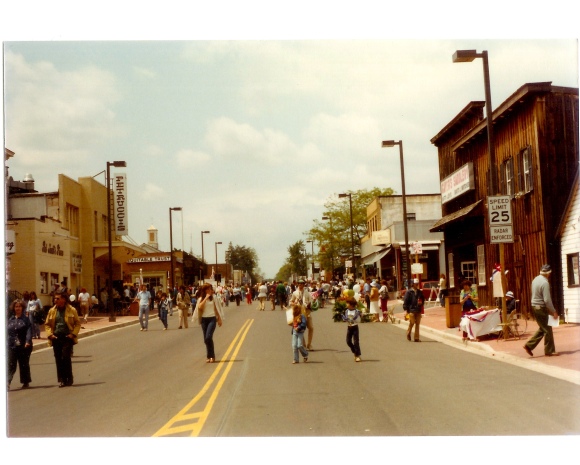 Each of the establishments from the old Marian Quinn prints I mentioned can be seen in this view from 1981, looking west on Main Street from its intersection with Washington Blvd. There’s Pal Jack’s Pizza on the left, just beside Petrucci’s. Further up, just past the Equitable Trust bank is the Laurel Art Center itself. Across the street, you can see the familiar Pepsi sign hanging from what was, at that time, Keller’s News Stand. This was no ordinary day, of course; people didn’t just walk in the middle of Main Street routinely in 1981. This was the Main Street Festival—the very first Main Street Festival, in fact. I find it entirely fitting that, in the middle of this vibrant, promising snapshot of a community embracing itself—there is the Laurel Art Center.

It’s also fitting that the city of Laurel recently designated a downtown arts district in this very section of town, with an eye to attracting new arts-based businesses and legitimizing the growing arts focus of the area. How terribly ironic it would be if the Laurel Art Center, after 35 years, is no longer around to be at the center of this great new community movement as well.